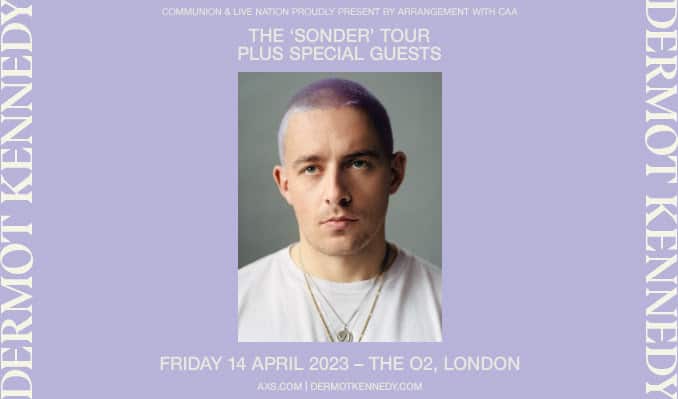 Acclaimed singer/songwriter Dermot Kennedy has announced his biggest ever tour, including a headline show at The O2 on Friday 14 April 2023.

The tour announcement coincides with Dermot releasing his latest single ‘Innocence and Sadness’, a song taken from his upcoming second album ‘SONDER’ out on 4 November. ‘Innocence and Sadness’, a beautiful piano ballad that’s as quiet and delicate as it is huge and powerful, is a perfect uplifting slice of the upcoming record, hitting you straight in the gut and leaving the listener reeling like only Dermot can.

On the track, Dermot commented; “It’s impossible for me to express how much this song means to me. I wrote this song on the piano in my parents’ house. “Innocence and sadness in the same night” means I cling to my childlike sense of wonder while learning how to face all the challenges of life. All in search of steady rhythm joy. Reliable and true joy.”

The forthcoming new album is an exciting new chapter for the global star. Sonder is summarised as “the realisation that each random passer-by is living a life as vivid and complex as your own,” a term that has resonated deeply with Kennedy. More highlights from the album include the lead single ‘Something to Someone’ which has topped over 20 million streams and is currently charting at both Triple A and Hot AC Radio. “Dreamer” another album track from the album, is a softer, piano-lead cut.

Nominated for the “Best International Male” BRIT Award in 2020, Dermot has now amassed nearly 4 billion streams across platforms and has the best-selling debut album in Ireland of this millennium, making him a platinum-selling artist in over 12 countries. His unique ability to unify and heal through his music has been apparent since the inception of his organic and meteoric rise.  His poetic, compelling music has resonated with music lovers across the globe, with notables including Taylor Swift, Dua Lipa and Shawn Mendes, all calling themselves fans.