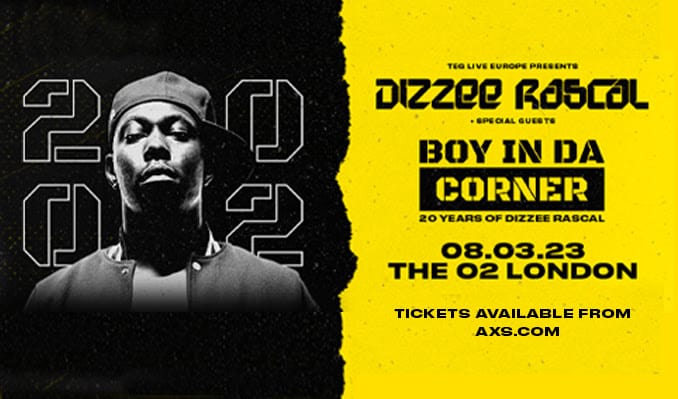 British musical legend Dizzee Rascal will mark the 20th anniversary of his ground-breaking debut album Boy In Da Corner with an iconic headline show at The O2 on 8 March 2023.

On the landmark moment, Dizzee commented: “It’s mad how it’s 20 years since Boy In Da Corner! That album changed my life and I’m forever thankful to everyone who’s shown love in that time. To celebrate two decades on, I’m buzzing to bring something very special to The O2 alongside some very special guests! Make sure to get your tickets and come celebrate with your boy!”.

Released in July 2003, when the innovative MC and producer was only 18, Boy In Da Corner won the prestigious Mercury Prize and remains the definitive grime full-length. The critically acclaimed LP saw Dizzee labelled “the most original and exciting artist to emerge from dance music in a decade,” by the Guardian.

As one of the UK’s most successful and influential rappers of all time, Dizzee Rascal is credited to bringing UK Grime to the masses during its peak in the mid noughties. After Boy In Da Corner catapulted him to international stardom, he has since worked with some of the biggest artists on the planet, such as Calvin Harris, Arctic Monkeys, Shakira, Armand van Helden, Florence and the Machine, will.i.am and Robbie Williams. He also has four UK #1 hit singles to his name – ‘Dance Wiv Me’, ‘Bonkers’, ‘Holiday’ and ‘Dirtee Disco’ – and six consecutive UK ‘Top 20’ albums – Showtime, Maths + English, Tongue ‘n’ Cheek, The Fifth, Raskit and E3 AF.