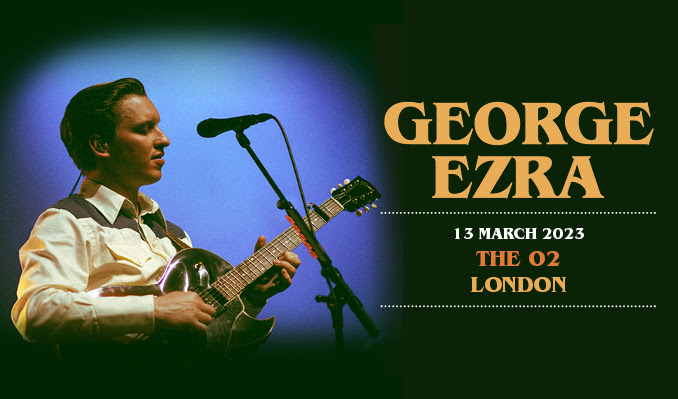 GEORGE EZRA
George Ezra continues his phenomenal ascent with the announcement of his first ever headline arena tour. The tour takes in 10 arena shows across the UK, culminating in two shows at The O2 next March.

“WE’RE GOING ON TOUR!” says George. “And not just any tour, the biggest run of dates that I will have ever played, ending at The O2. Touring these new songs along with all of the first album has meant that the last year has been the most amazing twelve months imaginable, to all of you that have made a show so far, thank you. And to all of you that we will see next year, hold tight! Get practicing those songs, polishing off your dancing shoes, let’s make it one to remember.”

The announcement comes fresh from George headlining Boardmasters Festival and ahead of his long since sold out autumn 2018 UK tour this November. His acclaimed number 1 album Staying At Tamara’s is officially the biggest selling album released so far this year and remains in the top five of the Official Albums Chart 20 weeks after release, whilst his current single ‘Shotgun’ became his first ever number 1 single in June.

Staying At Tamara’s is George’s second UK Number 1 album, hitting the summit in March. Staying At Tamara’s also features lead single ‘Paradise,’ which peaked at Number 2 in the UK singles chart and has now been certified Platinum, and ‘Hold My Girl’, ‘Pretty Shining People’, ‘Saviour,’ and ‘Don’t Matter Now’. The album is available in digital, CD, cassette and vinyl formats, and arrived nearly four years after the release of his multi-platinum and also-chart topping debut album Wanted On Voyage.