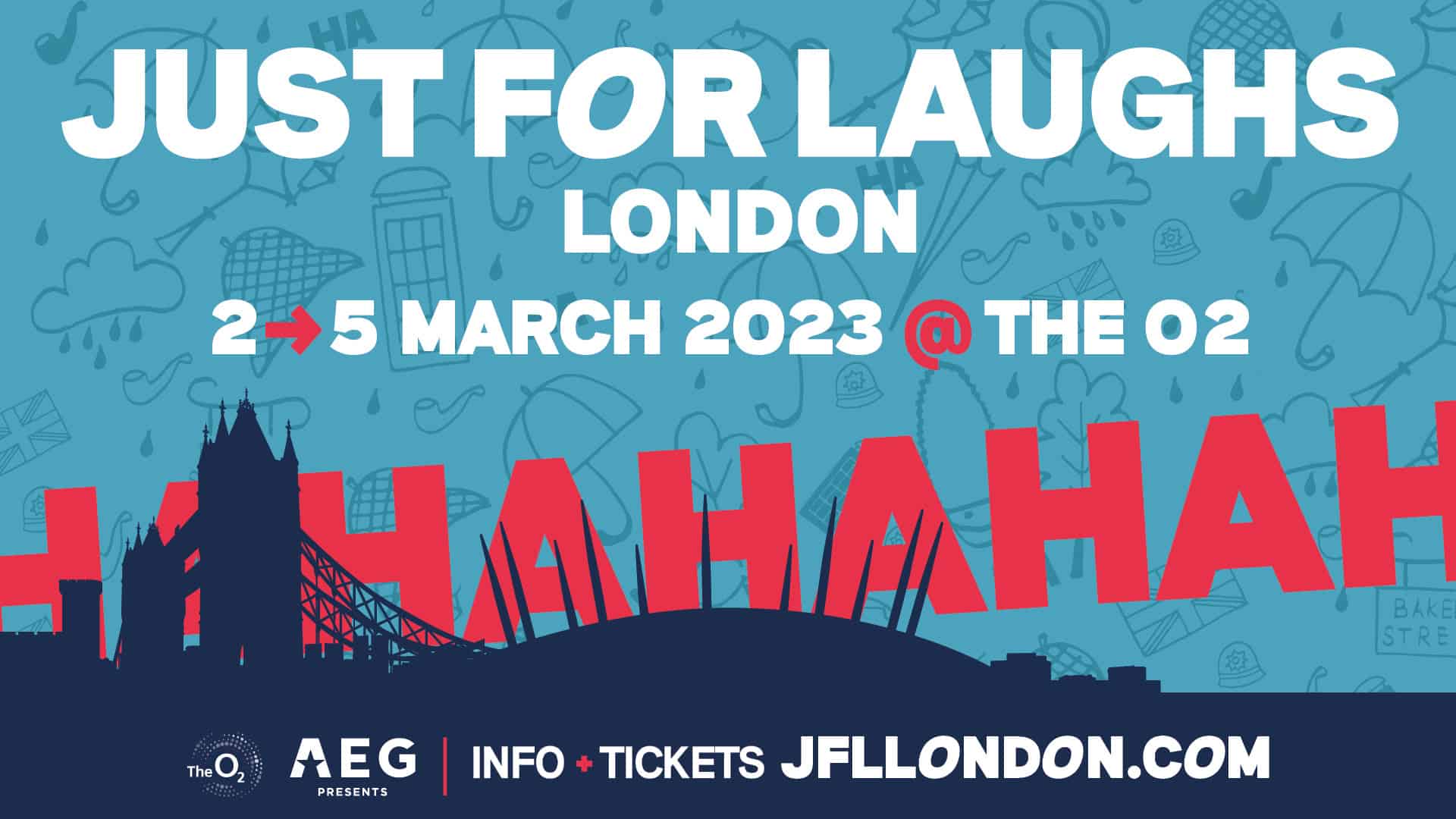 TODAY, THE FESTIVAL REVEALS THE FIRST SLATE OF 2023 PROGRAMMING WITH APPEARANCES BY:

Global leader in comedy, Just For Laughs, in collaboration with leading live entertainment company, AEG Presents, and The O2, the world’s most popular music, leisure and entertainment venue, are thrilled to share details of the first slate of programming to be added to the first-ever edition of Just For Laughs LONDON, a four-day festival being held between March 2-5 2023 inclusive at The O2.

Taking place in various venues covering the full campus of The O2 – from club shows at indigo at The O2 to London’s largest cinema, Cineworld as well as the world-famous arena – and featuring a mix of notable headliners, multi-comic shows, live podcast recordings, ‘In Conversations’, cast panels and more, Just for Laughs LONDON promises to deliver larger-than-life laughs as it unites today’s funniest UK and international comedy stars.

Just for Laughs LONDON is joining forces with the major charity Comic Relief, who have been changing lives across the world since 1985. Both our organisations believe in the power of laughter and people coming together to create positive change, so we are thrilled to be working together to program 2-3 shows at the first edition of Just For Laughs LONDON. The comedy festival will raise money to help Comic Relief support people through the toughest times of their lives in the UK and around the world.

Over the last 40 years, the unique and edgy style of British humour has become synonymous with what Just For Laughs is known for. They have introduced prime-time TV audiences to these rising British comedy stars on Channel 4, BBC, Channel 5 and to global audiences.

Bruce Hills, President of Just For Laughs: “Every year, without a doubt, the British contingent of comedians at JFL MONTRÉAL are one of the highlights of our event, which I credit to the comedians’ distinctiveness, originality and a point of view unlike any other. Now is the perfect time for us to bring our festival to shine the international spotlight on the incredible UK scene, while also bringing global comedy stars to join forces in producing one epic comedy celebration”.

Steve Homer, CEO of AEG Presents: “AEG Presents are hugely excited to be building what’s set to be London’s biggest ever comedy festival with the fantastic JFL and The O2 teams. We can’t wait to celebrate everything that’s so unique, quirky and world-renowned about British comedy along with some of the world’s biggest international stars – all gracing The O2’s hallowed stages together next March”.

Emma Bownes, VP of Venue Programming (Europe) at The O2: “We’re thrilled to be partnering with JFL and AEG Presents to bring the very first Just For Laughs LONDON to The O2 in March 2023. From Hollywood royalty with the legendary Ryan Reynolds, to the unstoppable Katherine Ryan, Just For Laughs LONDON will feature the best in stand-up, podcasts, and even wrestling across seven venues all within The O2’s campus. We look forward to hosting Just for Laughs LONDON for many years to come.”

Richard Curtis: “At Comic Relief, we believe in the power of comedy and entertainment to drive positive change across the world. That’s why I’m delighted to be hosting this special show at the very first Just For Laughs festival in the UK, with AEG and The O2. I am incredibly excited about sharing the stage with some of the superstars who’ve helped us raise more than £1.5billion in the last 35 years…and dropping some juicy morsels of backstage gossip into the open mouths – and/or ears – of our lovely audience of diehard comedy fans.”