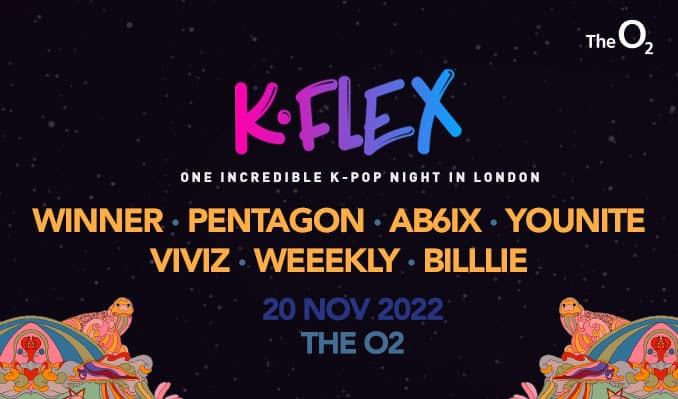 K.FLEX To Bring Incredible K-Pop Acts to London’s The O2

Following an incredible inaugural event in Frankfurt, which saw
more than 65,000 tickets sold across the May weekend, K.FLEX is heading to London on Sunday 20th November 2022 for a star-studded mega concert at the world’s most popular music, leisure and entertainment venue, The O2.

Headlining the show, Billboard World Album Chart-toppers Winner will bring their dazzling performance to The O2, in what’s set to be the Korean boyband’s first time performing in the UK/Europe. They will also be joined by quartet AB6IX, who ignited the stadium at K.FLEX’s inaugural festival, and are on track to become one of K-pop’s brightest new stars. Also joining the lineup are nine-piece Pentagon, who were nominated for Best Korean Act at the MTV Europe Music Awards in 2018, and rookie groups Weeekly and Younite. Another rookie group, Billlie, will astonish fans with stunning performances from their flurry of EPs after they debuted in 2021, while Viviz scooped Best Female Rookie at the 2022 Brand Of The Year Awards earlier this year.

The O2, which has held colossal shows from the likes of Robbie Williams, The Rolling Stones, Bon Jovi and Beyoncé, will also play host to a short recorded pre-show, celebrating the world of K-pop and all things Korea.

Organised by Live Company Group and Seoul based SG2, the show promises to be an unforgettable night, showcasing the talents of the fastest-growing music market in the world. With a rocketing global fanbase, K.FLEX aims to become the central meeting point of K-pop fans worldwide, celebrating rookie groups alongside better known stars.

David Ciclitira, founder and chairman of Live Company Group, said, “I’m pleased to be working with The O2 to bring an incredible K-pop concert experience to fans in London this November. K.FLEX is set to be a true celebration of the talents of the K-pop world!” Steve Sayer, VP & General Manager at The O2, said, “We’re so excited to welcome such a broad range of K-pop stars to The O2 this November for K.FLEX, with seven incredible performers including Winner, AB6IX, Pentagon and more. K-pop is continuing
to take the music industry by storm, and we’re incredibly proud to not only be providing a UK home to this year’s K.FLEX concert and next year’s cross-campus festival in September 2023, but also to be hosting the very first UK performances for some of these chart-topping artists. We’re looking forward to K-pop fans from across the world visiting The O2 for what’s sure to be a fantastic night of entertainment.”