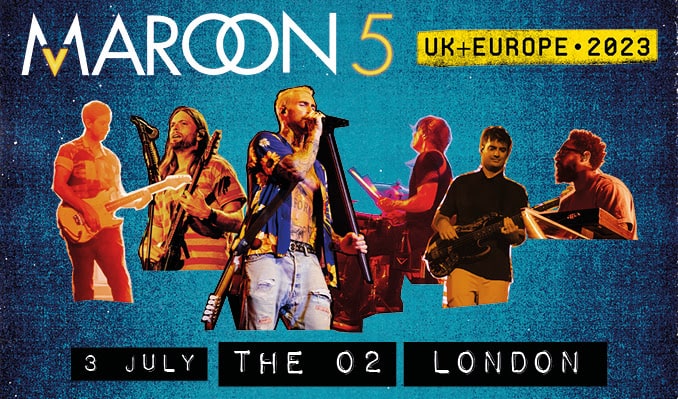 MAROON 5
MAROON 5 SET TO HEADLINE THE O2 IN 2023 GRAMMY® Award-winning multi-platinum powerhouse Maroon 5, have announced their UK/European your and are set to headline The O2 on Monday 3 July 2023. Maroon 5 stands out as not only one of pop music’s most enduring artists, but also one of the 21st century’s biggest acts. […]

GRAMMY® Award-winning multi-platinum powerhouse Maroon 5, have announced their UK/European your and are set to headline The O2 on Monday 3 July 2023.

Maroon 5 stands out as not only one of pop music’s most enduring artists, but also one of the 21st century’s biggest acts. The band won over fans and critics alike with the hybrid rock/R&B sound they introduced on their debut album, Songs About Jane. To date, the universally renowned Los Angeles band have achieved three GRAMMY® Awards, over 90 million in album sales, 550 million singles worldwide and earned gold and platinum certifications in more than 35 countries.

Released in the summer of 2021, Maroon 5’s current studio album, JORDI (222/ Interscope), features the band’s latest hit single “Beautiful Mistakes” featuring Megan Thee Stallion. “Beautiful Mistakes” was #1 most added at Top 40 and Hot AC when it impacted radio and charted in the Top 20 on the HOT 100, Top 40 and Hot AC charts. JORDI also includes the band’s recent hits “Nobody’s Love” and “Memories,” which has surpassed a groundbreaking 1 billion Spotify streams and amassed over 700 million YouTube views.

Maroon 5’s last studio album, Red Pill Blues featured the global hit single “Girls Like You” which reached #1 at Top 40, #1 at Adult Pop, #1 on the Billboard Hot 100 for seven consecutive weeks. The track accumulated over 1.2 billion Spotify streams and almost 3 billion YouTube/ VEVO views; notably becoming the most-watched video on VEVO in 2018. Most recently, the music video for the band’s hit “One More Night” became the Maroon 5’s third visual to surpass 1 billion views on YouTube, alongside “Sugar” and “Girls Like You.”

Maroon 5 has over 45 million monthly Spotify listeners and have played over 120 concerts in 30+ countries selling over 7,500,000 tickets worldwide.