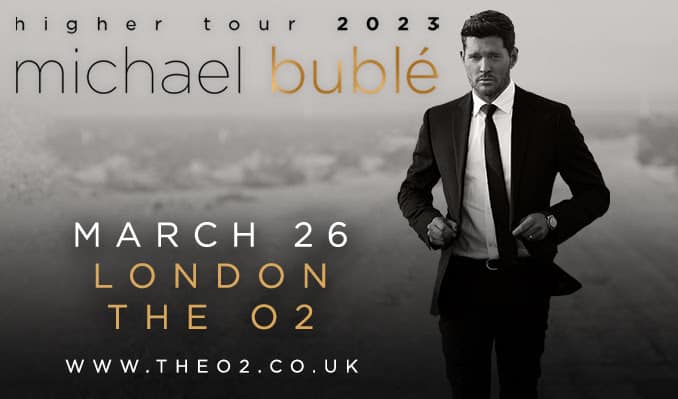 Michael Bublé
MICHAEL BUBLE RETURNS TO THE O2 IN 2023

Multi-platinum selling global superstar Michael Bublé has announced that he will be bringing his headline tour ‘Higher’ to The O2 on Sunday 26 March 2023.

The ‘Higher’ tour will see Michael performing his most-loved hits and the greatest tracks from his phenomenal career, alongside songs from his No.1 album ‘Higher’, released earlier this year.

Michael Bublé says: “I can’t wait to be back in arenas across the UK – it’s going to be true arena spectacle! I’m so excited for people to experience it! A lot of my fans have been part of my journey for the past 20 years, so to celebrate this milestone with everyone together is going to be extra special. I just want to connect to them, take them away, spread some goodness. That’s it!”

Next year’s shows follow Bublé’s sold-out global two-year tour, which saw him join The O2’s ‘21 Club’ in 2019 as one of only a handful of artists to have performed at the venue more than 21 times – a record only achieved by Prince, Take That, One Direction, Drake, Young Voices, Micky Flanagan and Michael McIntyre, alongside Michael Bublé.