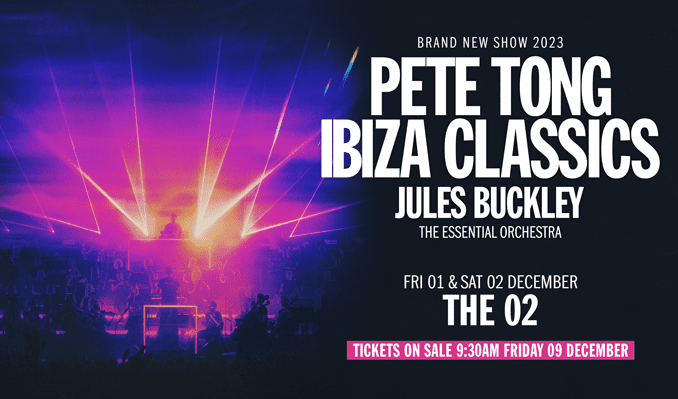 DJ, broadcaster and global dance music legend Pete Tong has announced the return of his critically acclaimed Ibiza Classics show for 2023 with Jules Buckley and featuring The Essential Orchestra. He’ll headline The O2 on Friday 1 and Saturday 2 December 2023.

Ibiza Classics has firmly cemented itself as part of the live music calendar becoming the world’s most iconic orchestral electronic music event. Celebrating the legacy of dance music, the new live show will include a host of special guest DJs and singers showcasing stunning reimagines of timeless classic house tracks. Combining unique orchestration with unparalleled electronic production, ravers rejoice as it is set to be the party of the year reminiscent of the White Isle and its musical history!

This year, Pete Tong and Jules Buckley released Amazon Original orchestration of ‘Free (Do What You Want To Do) with Ultra Naté and LP Giobbi, listen here.  ‘Free (Do What U Want)’ reimagines two timeless classics, combining orchestration and electronic production alongside a 12-person choir, to bring new life to the two hits. ‘Free’ has become an anthem for different groups over the last twenty years, more recently the track had a new lease of life during the pandemic as people yearned to be out dancing again. Watch the behind-the-scenes video filmed at AIR Studios here.  The recording follows their three acclaimed and chart-topping albums: ‘Classic House’, ‘Ibiza Classics’ and ‘Chilled Classics’ plus the EP ‘Pete Tong + Friends: Ibiza Classics’.

A pillar of dance music with an unparalleled ear for new talent, Pete Tong MBE is undeniably one of the world’s most influential figures. Over the last three decades – both publicly and behind the scenes – Pete has been revered as an arena-selling artist, DJ, music producer, A&R, and the voice of Radio 1’s prestigious dance programming. With an incredible 30+ year career, the tastemaker DJ, broadcaster and producer has been dedicated to making dance music a global genre, constantly pushing boundaries, and breaking new talent wherever he goes. A testament to his life spent in music year, Pete Tong MBE was honoured with the prestigious Music Industry Trusts Award (MITS) in 2021 for recognition of his outstanding contribution to the music and broadcast industries.