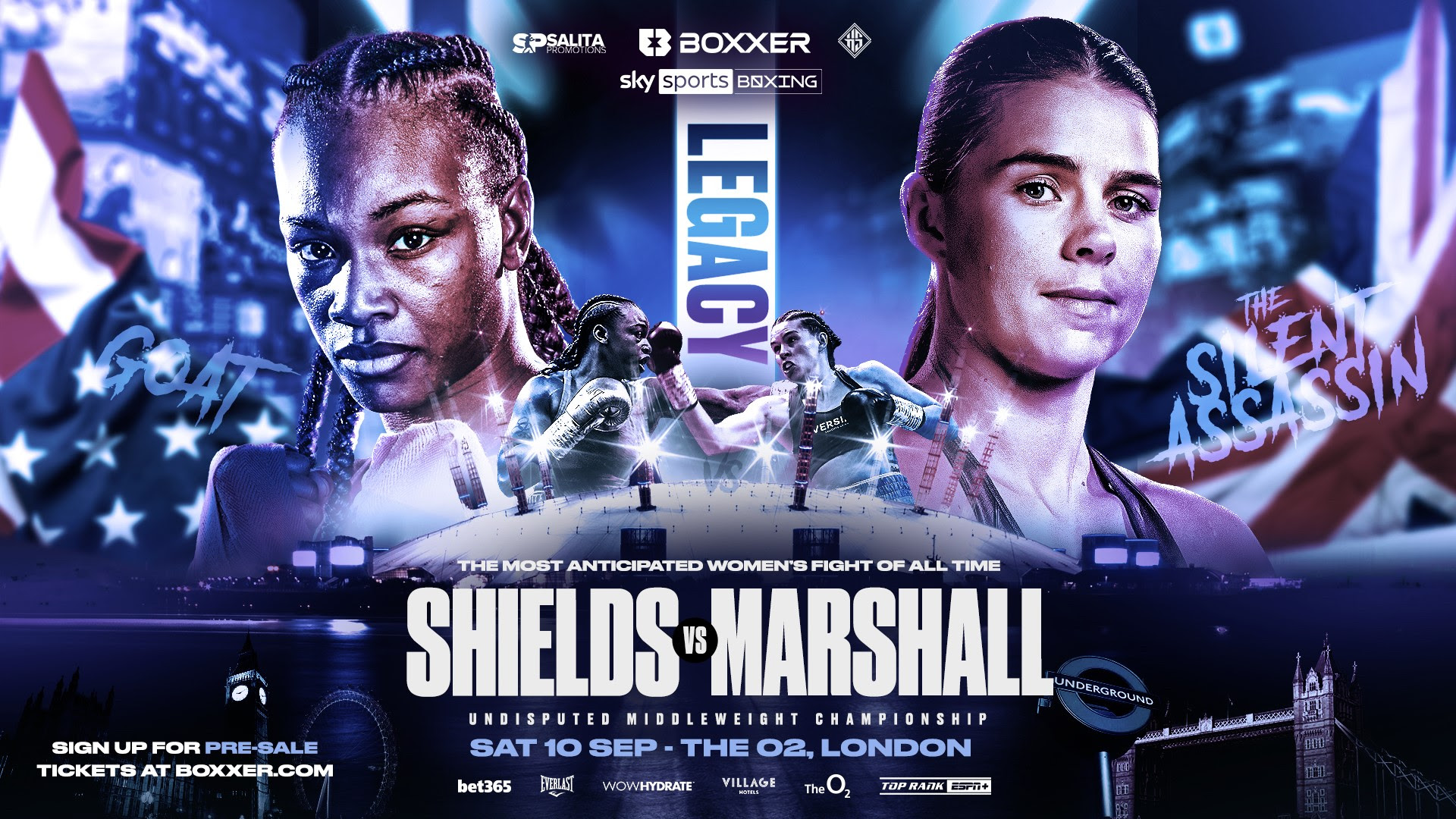 SHIELDS VS MARSHALL
BOXXER in association with Hennessy Sports and Salita Promotions, today officially announced that the long-awaited showdown between bitter rivals Claressa ‘GWOAT’ Shields (12-0, 2 KO’s) and Savannah ‘The Silent Assassin’ Marshall (12-0, 10 KO’s) will take place at The O2 in London on Saturday 10 September 2022.

BOXXER in association with Hennessy Sports and Salita Promotions, today officially announced that the long-awaited showdown between bitter rivals Claressa ‘GWOAT’ Shields (12-0, 2 KO’s) and Savannah ‘The Silent Assassin’ Marshall (12-0, 10 KO’s) will take place at The O2 in London on Saturday 10 September 2022.

The encounter will bring to a head a decade-long rivalry which began in their amateur days and has continued to intensify ever since. With both securing 12 wins from their 12 professional fights, this 13th showdown will prove to be unlucky for one.

Shields is no stranger to undisputed status. She held all four middleweight belts between 2019 and 2020, then repeated the feat at light-middleweight to become the first and only boxer ever to hold the four major titles in two weight classes simultaneously.

Her outstanding career also includes two Olympic gold medals, won at the 2012 and 2016 Olympic Games. Her perfect professional record is mirrored by an almost-perfect amateur record: her only ever loss inside a boxing ring came at the hands of Savannah Marshall.

That 2012 encounter ended with Marshall taking a decisive 14-8 points win, sparking one of the most bitter rivalries in today’s sporting landscape and making this one of the most highly anticipated bouts of recent memory.

With global interest in the fight and their legacy on the line, this historic fight also promises to elevate women’s boxing to a new level, ranking alongside any of the great championship showdowns in the men’s divisions.

Other ‘firsts’ on the night include:
•    First ever all-female UK boxing card
•    First female boxers to headline at The O2

The chief support slot of this historic card is a bout presented in association with Top Rank which will see WBO and IBF world champion Mikaela Mayer and WBC champion Alycia Baumgardner face off in a unification bout in the 130-pound division.

“It’s finally here. All sports need major rivalries to transcend their boundaries, and this is the biggest rivalry ever to come from women’s boxing. This is a major moment for the whole sport of boxing, a transatlantic fight which will bring new light to the sport. Two major stars, two elite athletes, two personalities and a story that you could not make up. Thank you to all the promoters and managers involved to make a fight that many thought could not happen. A historic night awaits at The O2,” said Ben Shalom, BOXXER Founder and CEO.

“This is a truly iconic fight for our sport on what will be an unprecedented night at London’s The O2 on September 10. To finally announce one of the most mouth-watering matches of this modern generation between our own incredible World Champion Savannah ‘The Silent Assassin’ Marshall and the GWOAT Claressa Shields, an American idol, is a pleasure and an honour,” said Adam Smith, Head of Boxing Development at Sky Sports.