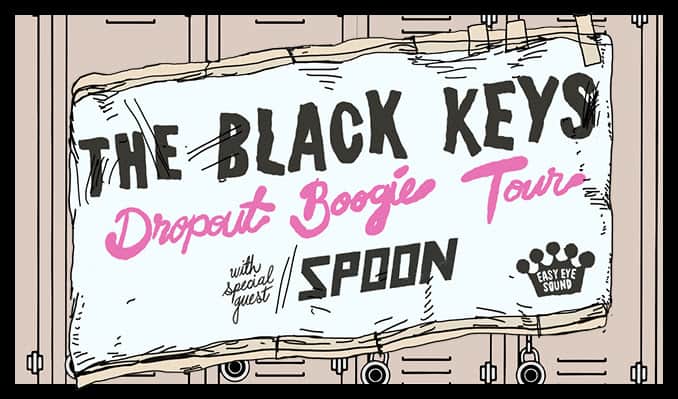 The Black Keys will bring their ‘Dropout Boogie’ Tour to The O2 on Wednesday 21 June 2023.

Singer/guitarist Dan Auerbach and drummer Patrick Carney say “After 8 long years we are excited to say The Black Keys are coming back to Europe and the UK. We can’t wait to see you at the shows in these iconic venues”.

These dates mark The Black Keys’ first European tour since 2015 and offer fans a rare opportunity to see the band at their finest.  Following an acclaimed, 32-date North American run earlier this year, the duo will deliver a loud and raw set featuring hits like ‘Howlin’ For You’, ‘Lonely Boy’ and ‘Gold On The Ceiling’, as well as performing songs from their latest album, Dropout Boogie, which was released in May and harks back to the stripped-down blues rock of their early days making music together in Akron, Ohio basements over 20 years ago.

About The Black Keys
Formed in Akron, Ohio in 2001, The Black Keys are singer/guitarist Dan Auerbach and drummer Patrick Carney.  They have been called ‘rock royalty’ by the Associated Press and ‘one of the best rock ‘n’ roll bands on the planet’ by Uncut.  Cutting their teeth playing small clubs, the band has gone on to sell out arena tours and has released 11 studio albums: its debut The Big Come Up (2002), followed by Thickfreakness (2003) and Rubber Factory (2004), along with their releases on Nonesuch Records, Magic Potion (2006), Attack & Release (2008), Brothers (2010), El Camino (2011), Turn Blue (2014), “Let’s Rock” (2019), Delta Kream (2021) and Dropout Boogie (2022).  The band has won six Grammy Awards and a BRIT, among other worldwide accolades, and headlined festivals in North America, South America, Mexico, Australia, and Europe.

This year, the duo received two more Grammy nominations, bringing their career total to sixteen, this time for Best Rock Album for Dropout Boogie, and Best Rock Performance for the single ‘Wild Child’, one of the biggest hits of their career to date.  On release, Dropout Boogie was the band’s sixth consecutive top 10 debut on the Billboard 200 in the US, its fifth consecutive top 10 album in the UK, as well as top 20 in Austria, Belgium, Canada, France, Germany, Netherlands, New Zealand, Portugal, Spain and Switzerland.  An Album of the Year in Mojo and Uncut amongst others, Rolling Stone called it ‘Some of the stickiest alt-boogie of their career,’ while Classic Rock proclaimed, ‘Exhilarating.  Rock‘n’roll in 2022 doesn’t get any better than this.’  In the words of the NME, ‘This pair are masters in capturing that timeless flair and spirit.  They’re the embodiment of a band set for good times.’