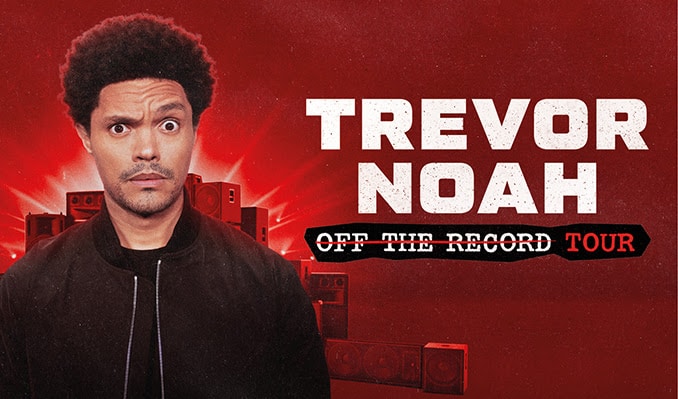 Award-winning comedian Trevor Noah returns to the UK with his brand-new show Off The Record. The influential talk show host will headline The O2 on Thursday 23 November 2023.

Known for Emmy® award-winning talk show – The Daily Show, Trevor has sold out shows over five continents, including two shows at The O2 in 2021 where he was the first comedian to perform after the pandemic.

Trevor is the most successful comedian in Africa. ”The Daily Show with Trevor Noah” has broken free from the restraints of a 30-minute linear show, producing engaging social content, award-winning digital series, podcasts and more for its global audience.  This year, “The Daily Show with Trevor Noah” landed a record number of seven Emmy Award nominations. Trevor has served as the Grammy Awards host in 2021 and 2022. His success has also spanned to sold out stand-up comedy shows over 5 continents.

Trevor has written, produced, and starred in 12 comedy specials, including his upcoming, “I Wish You Would,” his third for Netflix, premiering globally November 22. True to form, Trevor hilariously shares revelations about learning to speak German, modern communication, and his love for curry.

The Audible edition of “Born a Crime,” performed by Trevor, was produced by Audible and remains one of the top-selling, highest-rated, and most-commented-on Audible performances of all time. To date, “Born a Crime” has sold over 3 million copies across all formats.

Day Zero Productions, a joint venture between Paramount Global and Trevor Noah, develops and produces diverse, high-quality creative content for a global audience. With projects set up both within the Paramount Global family, as well as at other studios, streamers, and live platforms, Day Zero focuses on entertaining and impactful content, with an eye toward authentic stories from diverse points of view.

In 2018, Noah launched the Trevor Noah Foundation to improve equitable access to quality education for underserved youth in South Africa. Noah’s vision is a world where education enables youth to dream, see and build the impossible.